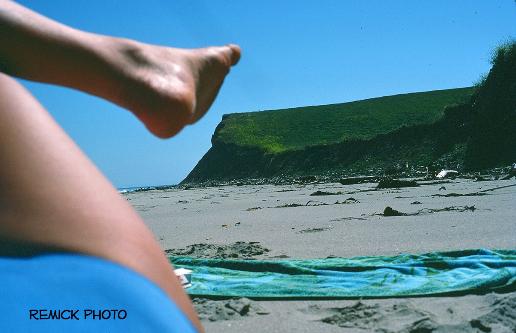 Terry Remick was spending a lot of her time with friends on the beaches of
Hollister Ranch, enjoying her early twenties, when out of nowhere, a major
Hollywood production drops in her lap.
Warner Brothers rented the Bixby Ranch to film a major motion picture called
Big Wednesday, and she had a front row seat. 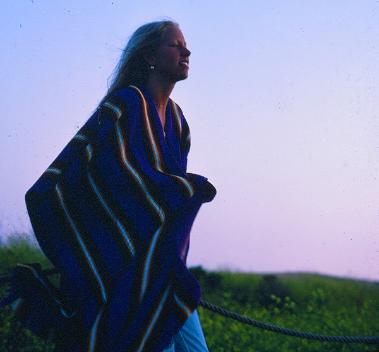 Lucky for us, Terry was a photographer, and she happened to be friends with George Greenough, who
was hired as a photographer for the film. The production assistant  tried to shoo her off when he saw
her camera but George told them she was a regular and harmless, so they let her keep shooting.
Terry was commuting from the Ranch and Goleta to attend SBCC and UCSB. 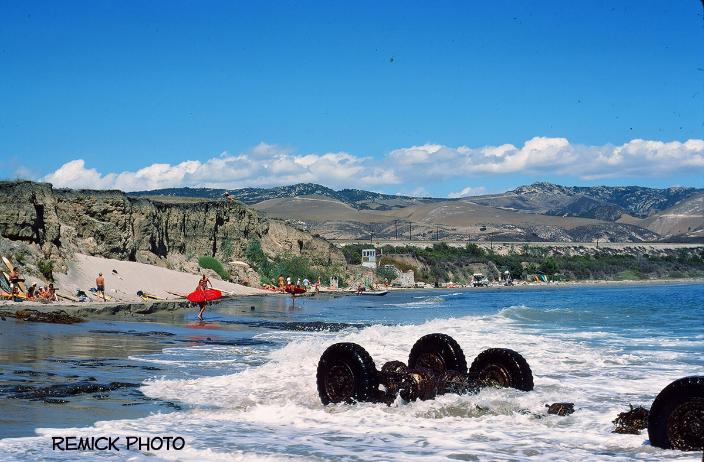 When we saw these photos, we contacted surf legend Denny Aaberg to give us some more insight.
And Denny should know, he co-wrote the film with the director John Milius!
Above is a distant view of the set they made, a replica of the Malibu wall, complete with lifeguard tower.
In the foreground is what Denny calls the crumple car. As he remembers, it was some sort of military
vehicle that was there for years and years.
Crumple Car was a nickname for Little Drakes. At some point, old cars were placed on the beach by
ranchers to try to keep the surfers out. It didn’t work.
Denny wrote a song about it with Phil Pritchard and it was featured in this film and became quite popular.
Click Here
to hear the song and see some stills from the film. 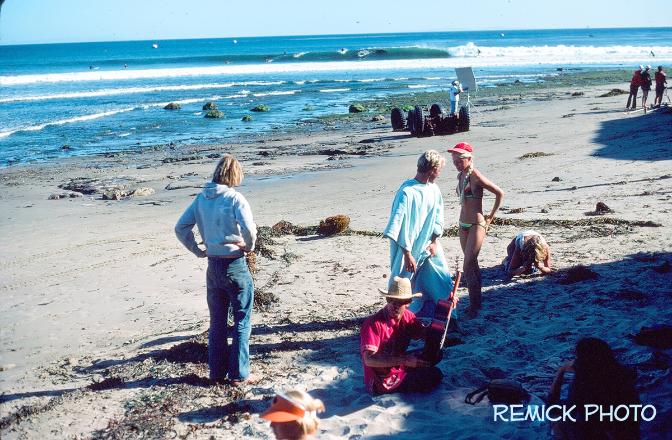 Above is George Greenough, Denny Aaberg with the guitar, Peter Townend and Townend’s girlfriend.
Greenough was hired to do water shots and Townend was a surf double for William Katt, one of the stars
in the film. Remick says this was typical Greenough attire; barefoot, jeans, sweatshirt and self cut hair.
In the background you can see them setting up a shot near the crumple car.
You can also see a pretty nice wave rolling through…Great photo. 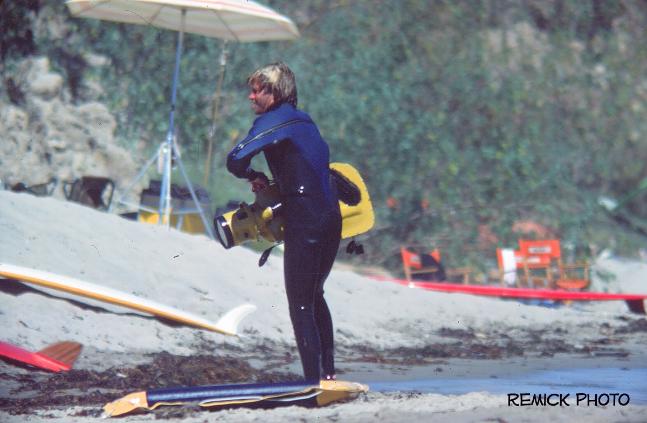 For those of you that don’t know about George Greenough, you should learn.
Click Here for starters.
Terry knew him through friends at the beach and Denny knew him from surfing.
He had a lot of innovative ideas that changed surfing, and he created them.
The water camera he’s holding was one of those ideas. He created this waterproof
fiberglass housing for a big, bulky 35 mm movie camera.
In the background you see all the Hollywood chairs for the actors and such. Also notice all
the longboards. These were all props, created for the film, since this portion of it was taking
place in the early sixties. They also created a fictional Bear Surfboards label for this movie,
which became quite popular for a while afterwards. 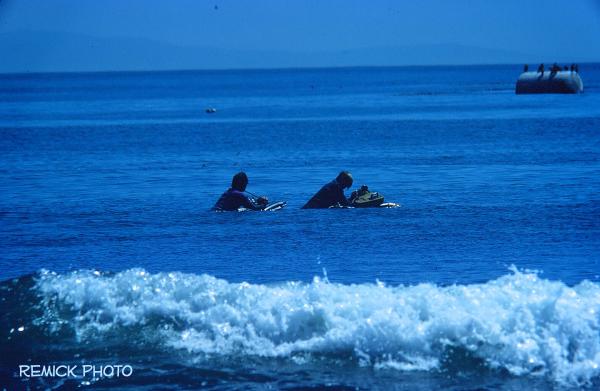 There goes Greenough to get some water shots, with an assistant, we guess. 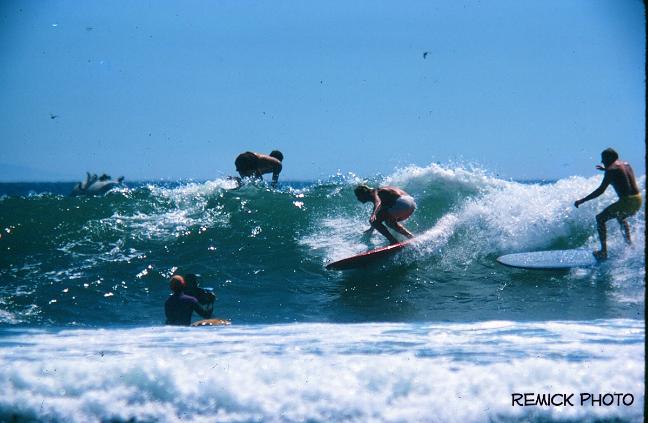 Another famous water photographer, Dan Merkel, was hired to shoot this film.
Click Here to learn about Dan.
Above he is shooting Billy Hamilton and Ian Cairns in action.
Hamilton was surfing for Jan Michael Vincent’s character and Cairns was the double for Gary Busey.
They’re riding prop boards, made for the movie, and no wetsuits, since this was supposed to the early
sixties Malibu.
That camera looks heavy… 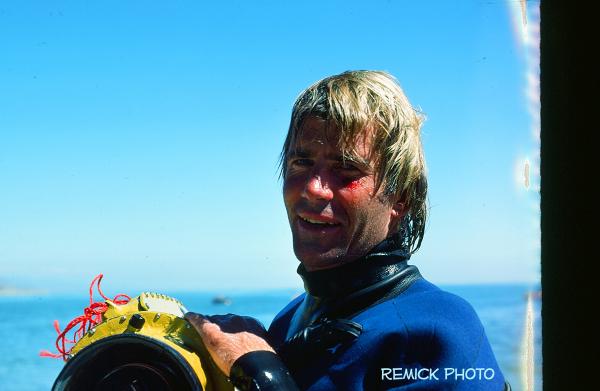 This is one of Terry’s favorite shots. She said it was the last shot on the roll.
Looks like that heavy camera setup bumped George in the eye, and he’s laughing it off. 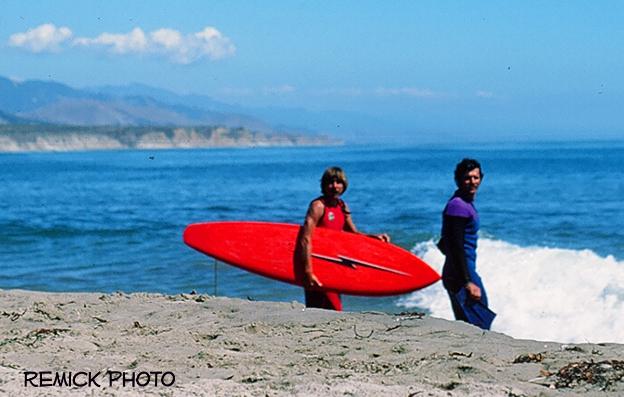 Another luminary brought in for this film was none other than Gerry Lopez.
Shown here walking out to the surf with Dan Merkel and one of his legendary lightning bolt boards. 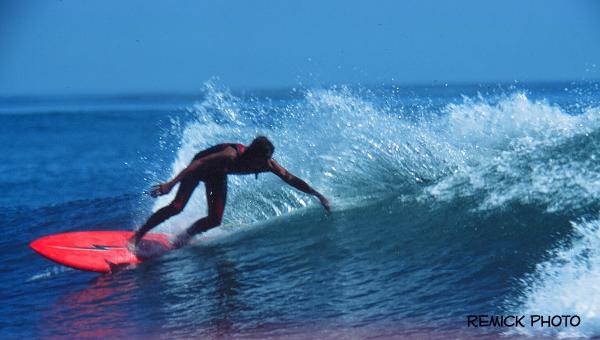 Lopez plays himself in the film. 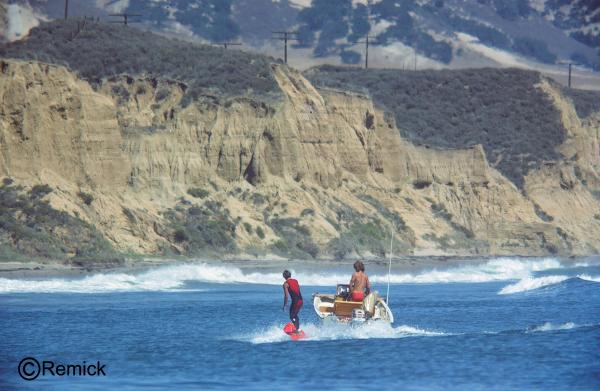 Here he’s getting pulled behind a boat, probably just killing time between takes.
What a way to make a living, eh? 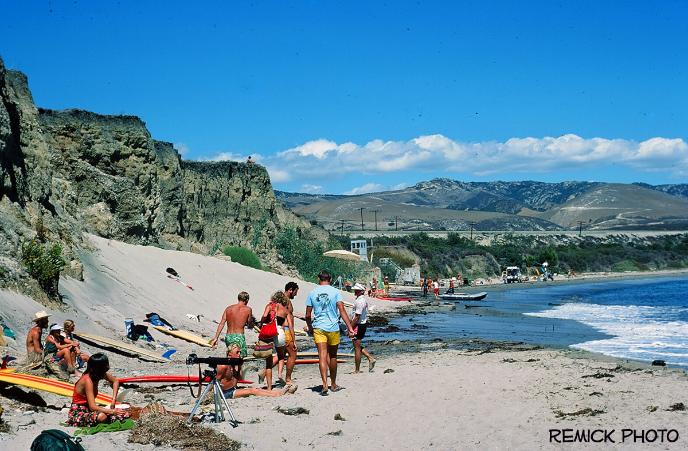 Which brings us to the extras.
Aaberg says there were about 50 extras used for the scenes shot at Cojo. The film makers had what
they refer to as a cattle call up at the Riviera theater to select the lucky folks. Even luckier was Denny,
who got to help choose from hundreds of cute little beach bunnies. Among these was Kym Herrin, who
later gained fame as a Playboy bunny. The extras got paid $60 a day, plus a catered lunch and a bus
ride up from Santa Barbara everyday.
Terry didn’t bother with all that, she was already at the beach.
Denny can be seen above in the green shorts and that’s Ian Cairns in the yellow trunks. 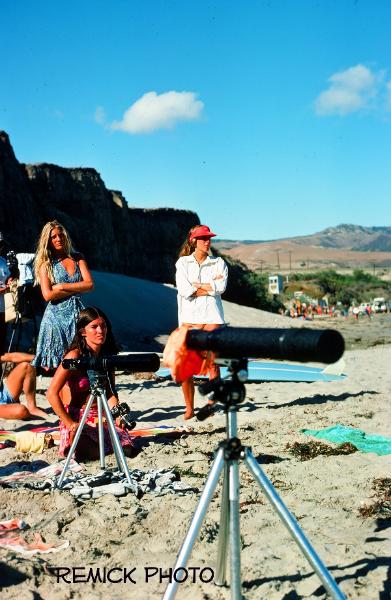 A few of the extras,including Kym Herrin in the blue dress,
working hard for their sixty bones.
Not to mention a few vintage lenses. 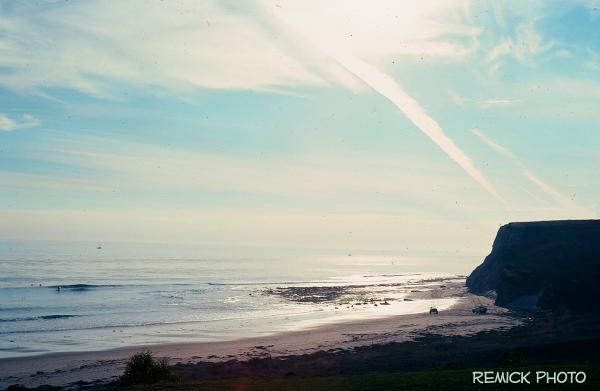 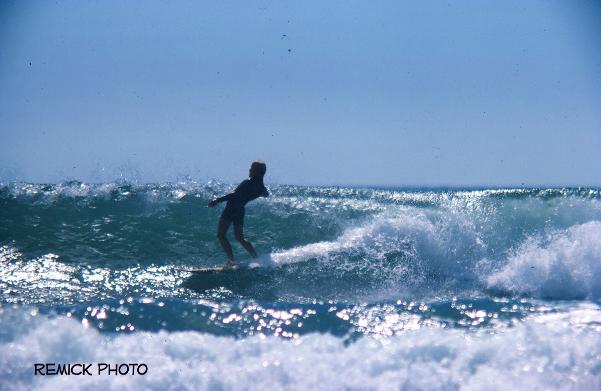 And then there was the surfing.
Above is Peter Townend, with a classic arch stance. This is reminiscent of Denny’s brother
Kemp Aaberg’s famous pose, captured in an iconic photo taken by John Severson, below. 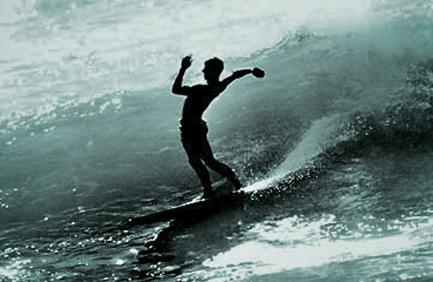 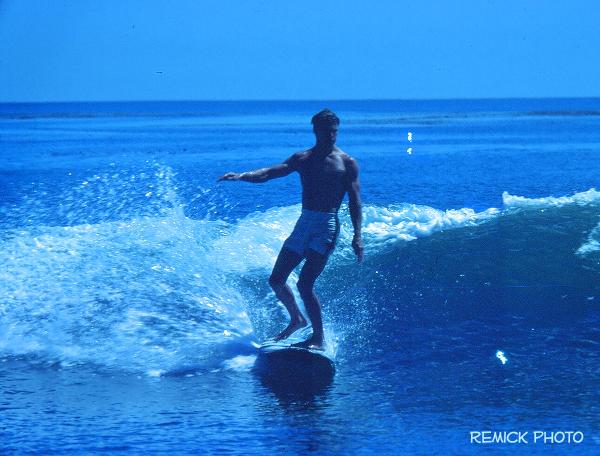 This is a great shot of Jan Michael Vincent, one of the actors that actually could surf.
They still used a stunt double for a lot of the surfing action, his was Bill Hamilton. 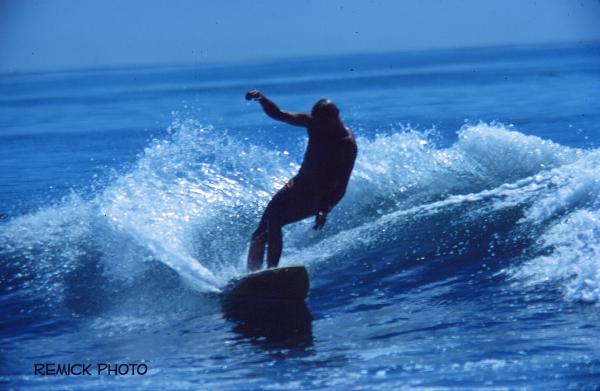 Ian Cairns, shown above, was the surf double for Gary Busey.
At  6’2″ and 190 lbs., he was a big, powerful Australian surf star that had won lots of
international contests. 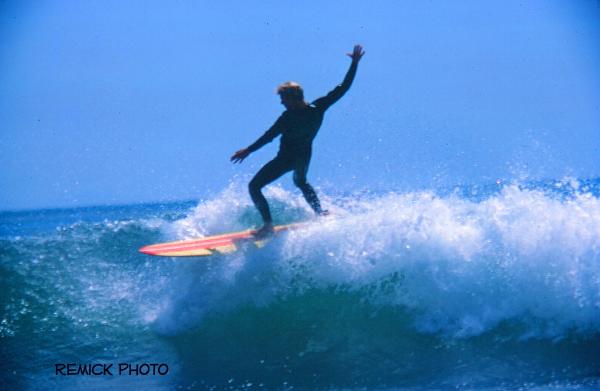 Here’s Jan Michael Vincent again.
He’s riding one of the prop longboards made for the film. 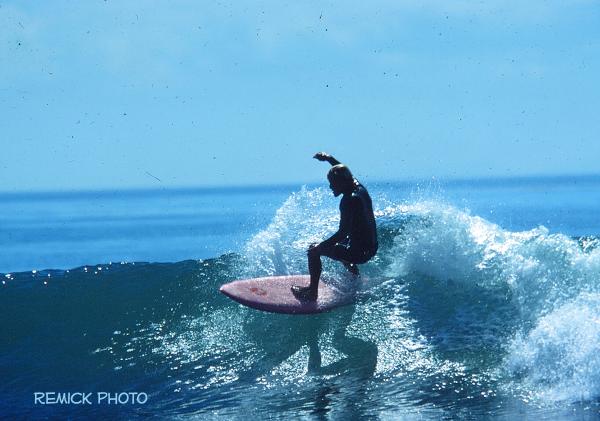 Above and below are Peter Townend.
We know these are freesurfing shots because he’s riding a late 70’s
shortboard. When they were shooting, they would be riding longboards
and no wetsuit, or maybe a top only. 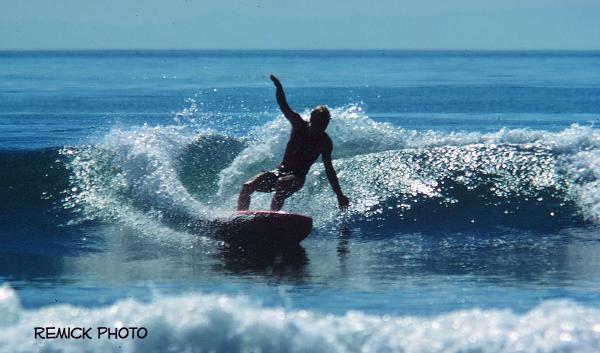 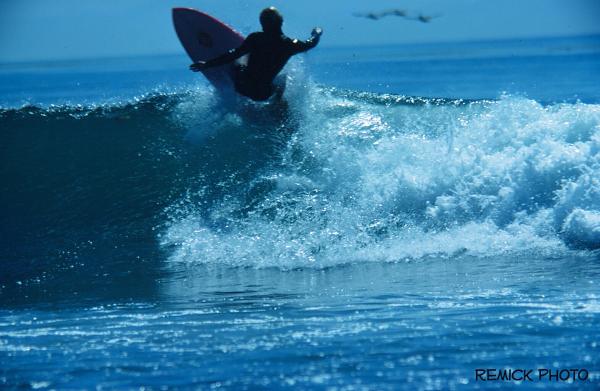 P.T. was also an Aussie surf legend and was the first “professional” world champion.
He has since had a long and illustrious career promoting surfing as a sport.
He was the double for William Katt in the film. 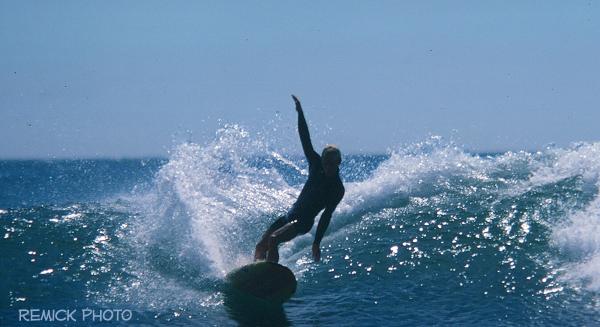 Billy Hamilton, above, was the double for Jan Michael Vincent.
He was a very popular surfer at the time, but now is best known for being the father of
Laird Hamilton.
After the film came out, Bill began shaping under the Bear label depicted in the movie.
Business boomed with the late ’80s surfwear explosion as Bear expanded its line,
replacing fishing as his main source of income.
His success was shortlived, as Milius sued for patent rights. 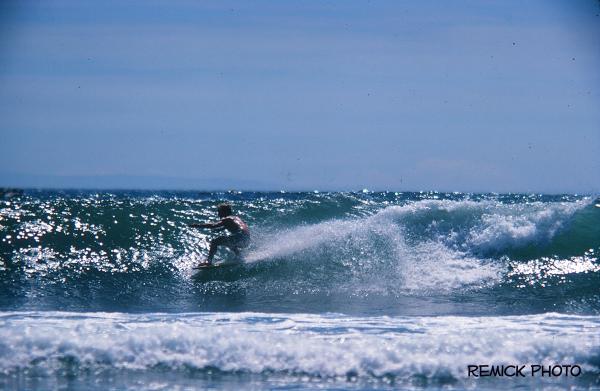 Finally, a nice shot of Denny Aaberg, co-writer of the film, enjoying the fruits of his labor.
While the studio had high hopes for the success of Big Wednesday, it flopped, and was out
of the theaters in a month. With the advent of VCRs and  DVD players, it is now a full blown
cult classic. Some say the best surf movie Hollywood has made yet!
Either way, the cast and crew enjoyed filming at such an amazing location. 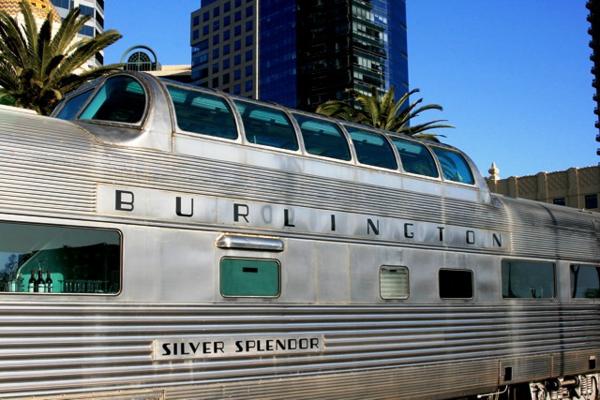 Terry Remick is now heavily involved with the marketing of vintage rail trips along the central coast.
She is the guide for a few of these private rail trips which travel through the Gaviota Coast.
Terry loves it because it allows her to stay in touch with her old friend, The Ranch.
Send her a message via her facebook page if you’d like to go. Trips planned for this summer include
roundtrip runs to SLO from SB and Goleta on June 30th, July 21st and August 18th.
Above is the Silver Splendor 1956 and below is the Overland Trail 1949 Pullman Club Car . 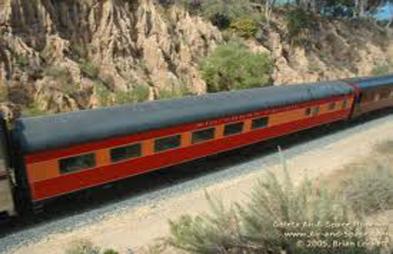 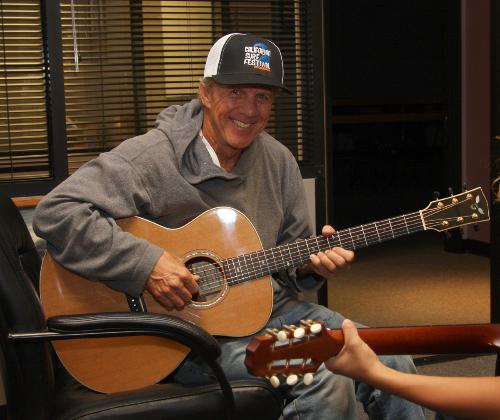 Denny Aaberg continues his life long passion for playing music.
Together with percussionist Sam Adams, they are the Saltwater Cowboys and play gigs
on a regular basis.


P.S.
We got alot of emails regarding this page from folks that were extras.
Here’s a good one from Paul Baragona.


Great feature on Big Wednesday.  I have fond memories of being one of the extras.
We were paid for basically hanging out on the beach at Cojo all day.  Every morning we’d
meet at Earl Warren and get on a bus for the ride up,  going through the Jalama entrance to
Bixby.  A truck followed behind with our surfboards.  I dug a Yater spoon out of David
Adornetto’s back yard and used it as my longboard, though we also brought our
shortboards. Of the eight hours we were there everyday, we probably averaged about an
hour of actually doing something for the movie.  Our best coup was stashing our boards in
the bushes the night before a swell was supposed to hit.  Sure enough, the next morning we
arrived to 4-6′ perfect Cojo with only P.T., Cairns, Mark Warren, and Gerry Lopez out.  We
grabbed our boards from the bushes and had a session with the pros for the 45 minutes it
took for the truck with everyone else’s boards to show up.  Milius cancelled shooting for the
day and let everyone surf.  My contribution to the movie was telling the assistant director
that the license plates on the cars were wrong for the period.
Next day, the cars had new (old) license plates.
Too bad the movie sucked, the premiere at the Arlington was pretty exciting anyway.”


No Ads. No Hype.
No Sponsors. No Stress.
Just Stoke.