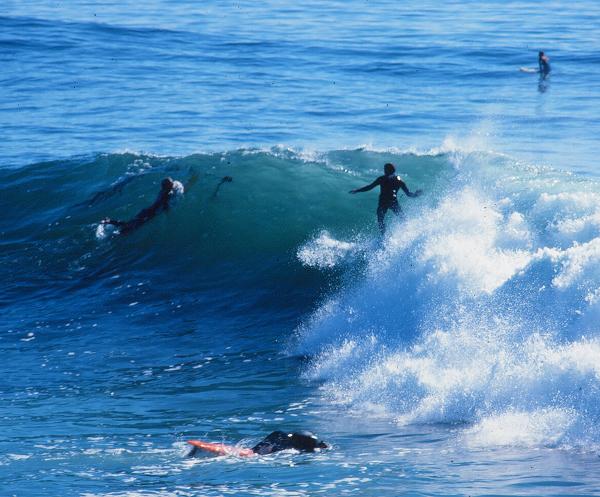 Casey Hart grew up surfing in Goleta.
When we met, he handed me a vintage slide box full of forgotten memories.
We got them scanned and found some gems.
Above is Casey enjoying a winter swell at a still remote Goleta spot. 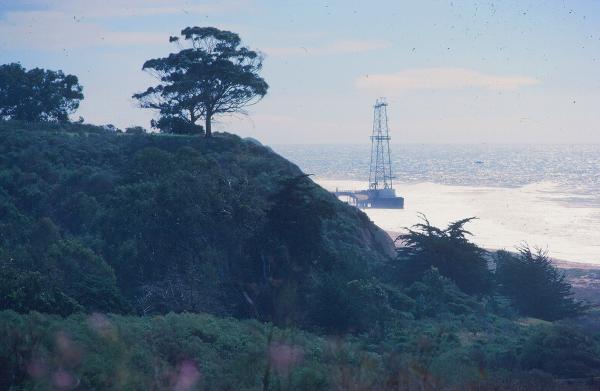 Look at this jewel. Recognize it?
This is Haskells, B.B. (Before Bacara).
The mighty tree on top of the hill is still going strong, but that oil pier is long gone.
Only remnants of it remain. 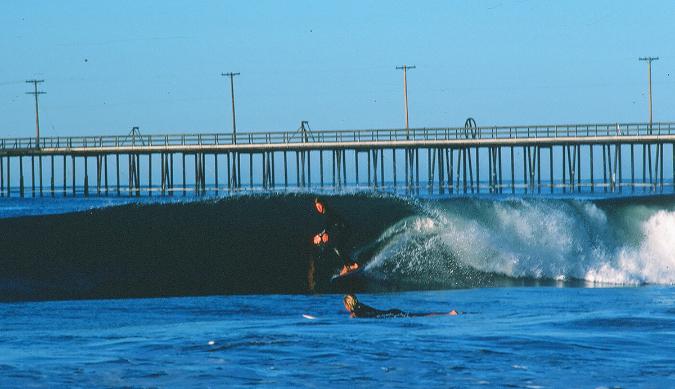 Here’s a vintage Haskells Tube, back when the pier was long and the sand bars were substantial.
Paul Crippa , AKA Crypto night. 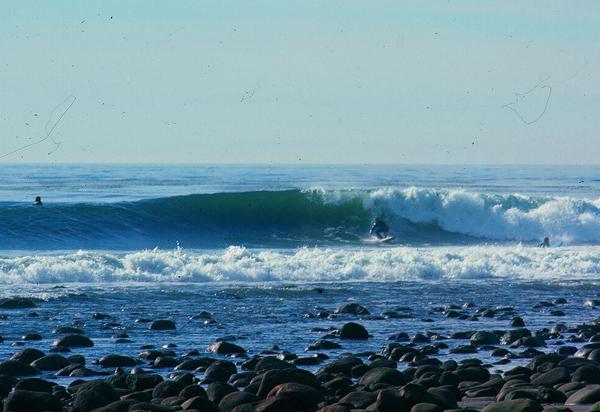 Most of the slides were from 1975. A golden era in Goleta surf history.
This is Casey practicing his switchfoot at El Cap. 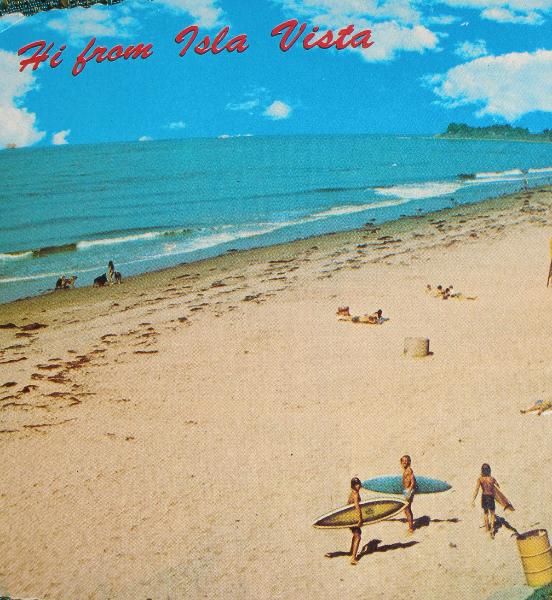 This is an actual postcard from Isla Vista; “Hi” from Isla Vista, appropriately enough.
No pun intended, I’m sure.
The surfers in the photo are all Casey’s buds.
Steve Donnell, Paul Crippa and Jerry Stone.
They were all ditching school to surf this fine day in 1975.
Doesn’t exactly look like it was pumping, but check those shapes they are using.
Not to mention, ALL THAT SAND!! 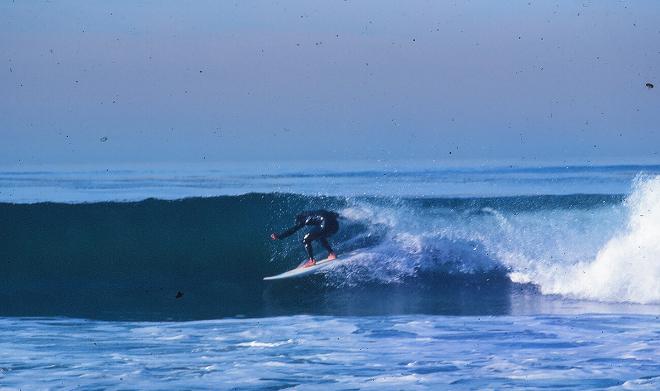 The guy in this photo was a professional surfer, then a shaper and a shop owner and now a
world renowned photographer and cinematographer. Yep, that’s Goleta’s own David Puu.
Ripping a Sands beauty in what Casey calls, ” the Dave stance”. 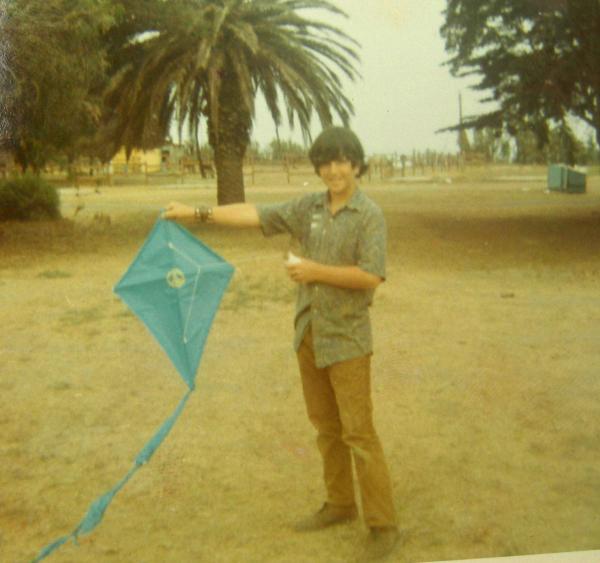 The Hart family moved to Isla Vista in 1958, when it was bamboo jungles and dirt roads.
The first time he surfed was 1961, when he was five years old.
He was pushed out on an old longboard at Campus Point.
He really got into it when he was in the 9th grade at Goleta Valley junior High and by the early seventies,
surfing was what he lived for.
Here he proudly displays his peace sign kite he made at summer camp at Camp Dune, Devereux Point,
1969.
Notice the horses stable and old military outhouse in the background. 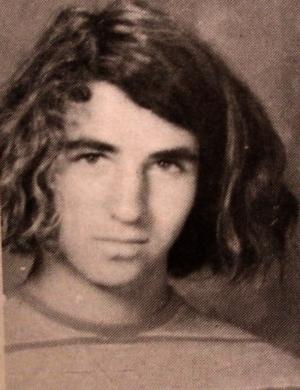 A seventeen year old Casey, rockin’ his favorite Hang Ten shirt.
He went to Dos Pueblos High School, which back then had the nickname “Hippie High”.
Can’t imagine why….
Oh, and if you ladies are wondering, he hasn’t changed a bit. 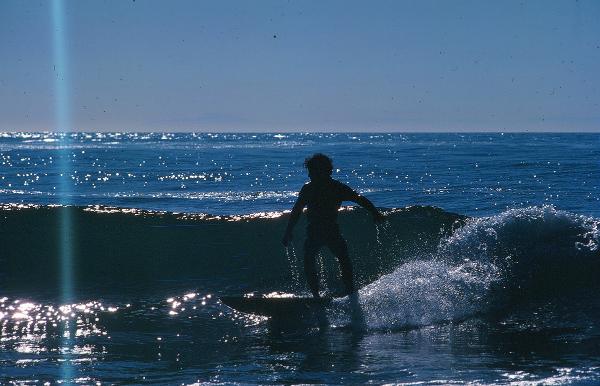 This is Casey going backside at Depressions in the early 1970’s.
Some of the guys that really taught him and helped him surf better were Jerry Stone,
Norm Graziano , Cappy , Steve Donnell and Paul Crippa. 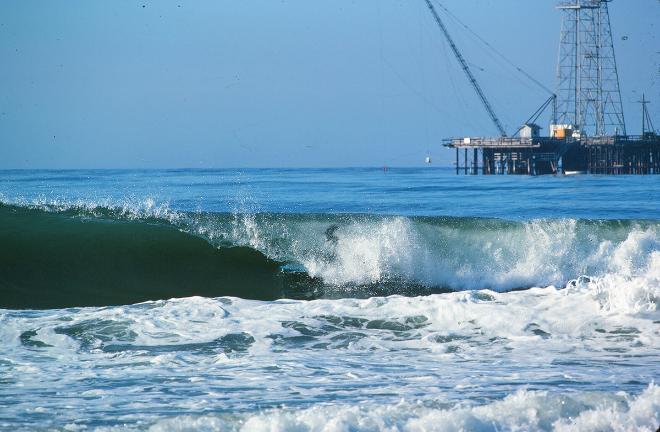 See that tip of a board in there? That belongs to Norm Graziano, or Grunion as he was called on occasion.
In the background is the old Haskells pier. The scene of lots of youthful mischief… 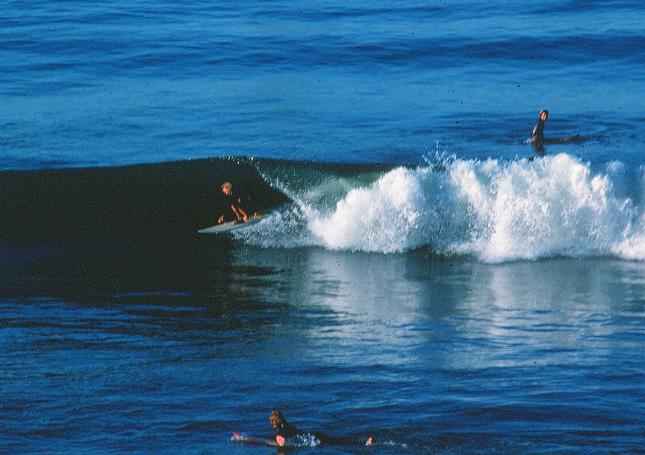 Another glassy day, same spot. That’s Jerry Stone, with Cappy on the outside watching. 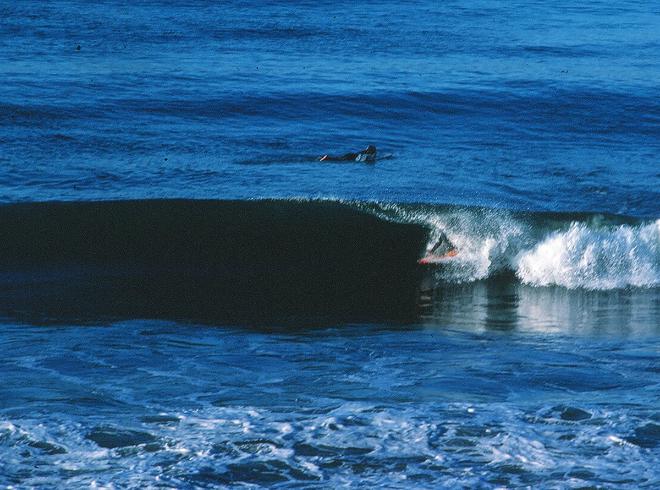 And then Cappy gets his turn…So clean. 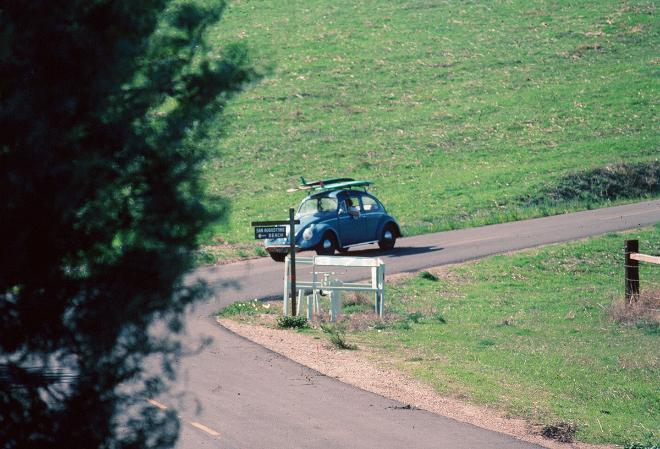 These guys surfed all up and down the coast.
They loved Lorraines. That was their spot .( Back then, you could drive on to the beach there.)
They surfed from Rincon to Jalama and even Oregon! And of course, the Ranch.
This photo was probably 1972 or so, Casey was 16 years old.
His friend Steve Aldridge had this sweet 1960’s bug. He was older and had a car.
He would let them drive sometimes. That car was always full of stoked groms. 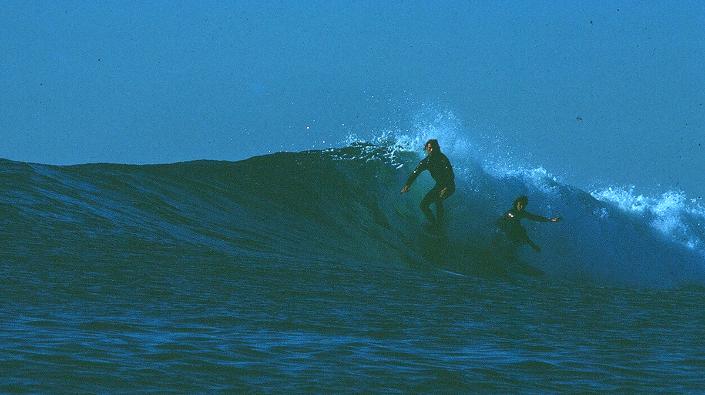 Casey sharing a wave with Bill Anderson at Big Drakes. 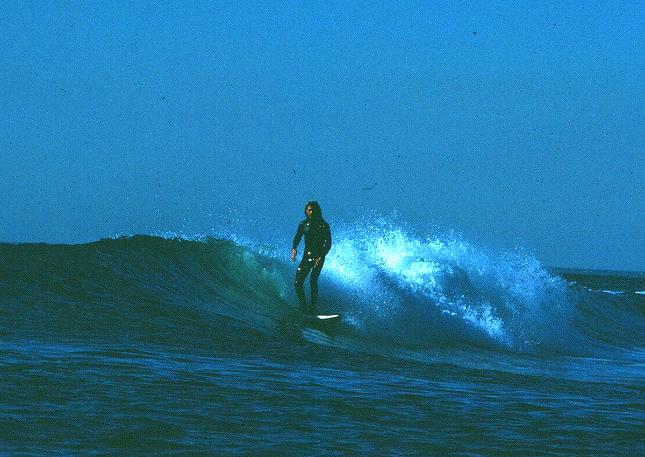 Bill Anderson of Anderson Boats. They called him Big Andy. 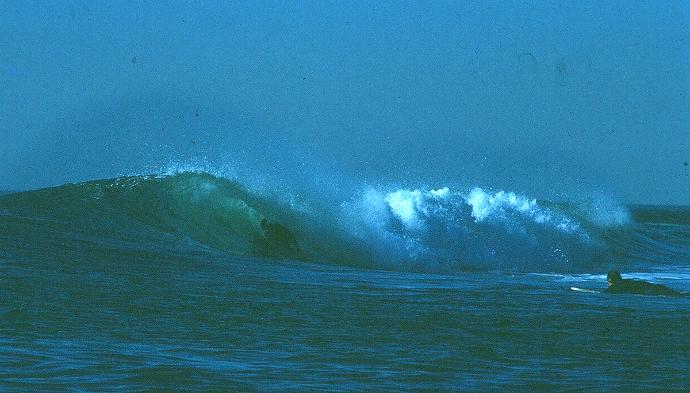 Casey getting barreled at the Ranch. 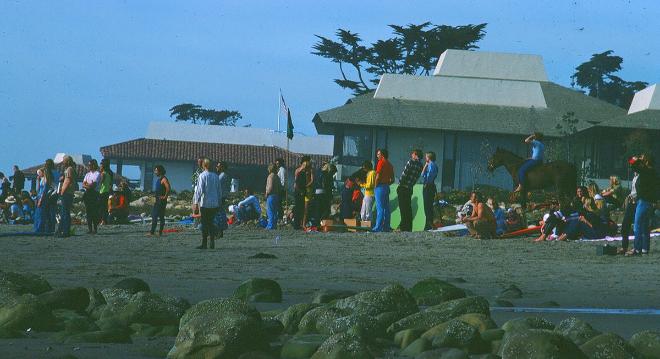 Here’s an interesting shot of the crowd watching a really big day at Hammonds in 1975.
See anybody you know? 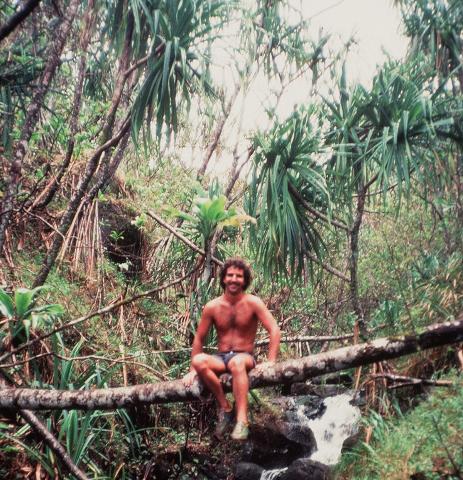 Casey’s senior year he cut out early went to Hawaii with most his buddies.
He’s pictured here on the trail to Hanakapiai beach from Kee beach,
north shore of Kauai. 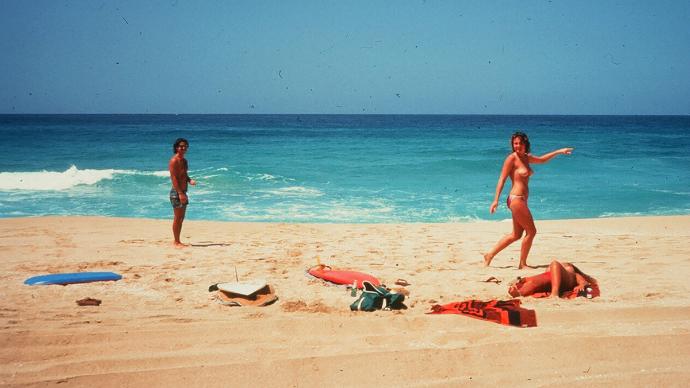 Casey and Andy Hur enjoyed a visit to the south side of Kauai at Polihale state beach
with their girlfriends.
Looks like fun to us, and what a beautiful beach! 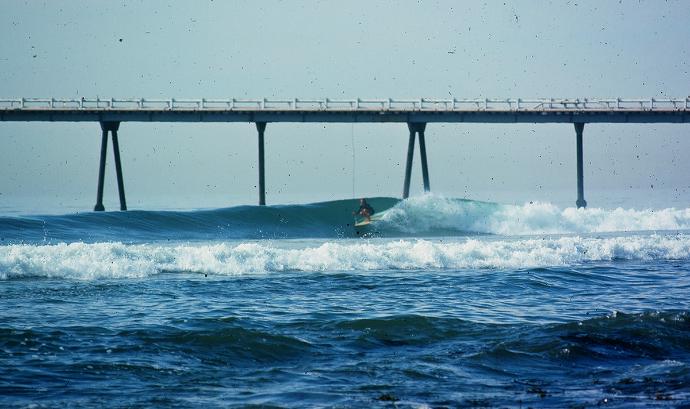 Back on the west coast, a couple of shots of a fun day at Little Rincon.
Above and below is John Cline, shot with Casey’s Nikon Nikormat that he found!
Later he traded it for a B.M.W. 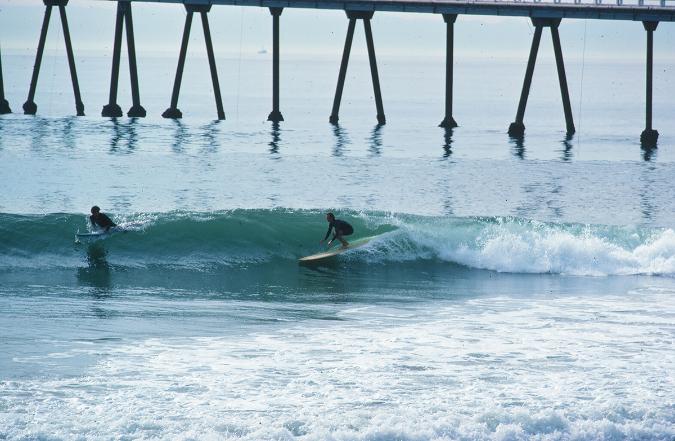 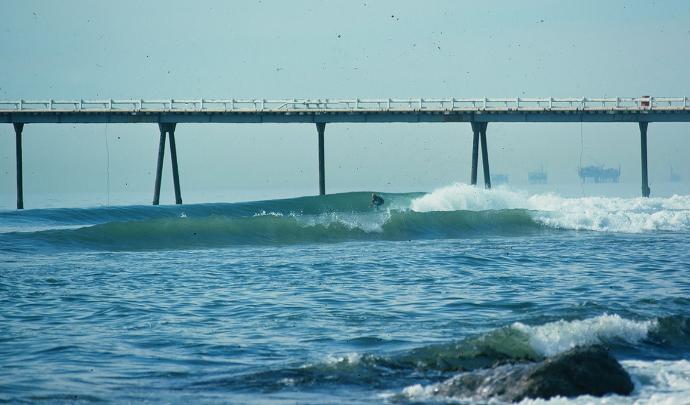 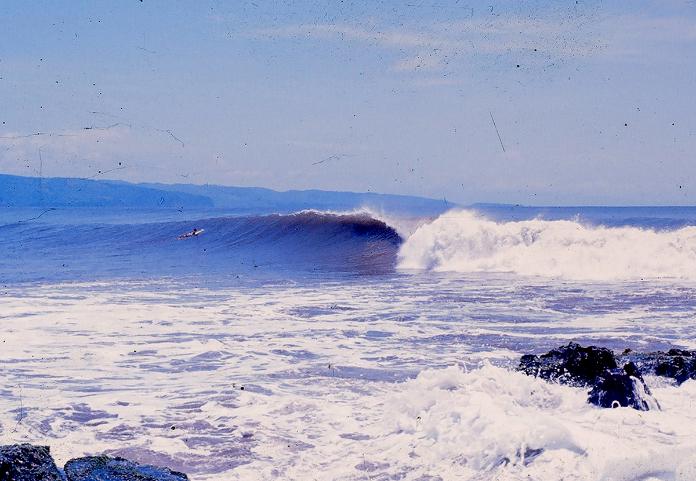 This is a secret spot near Big Sur . Casey paddling out. Approx. 8+  feet.
He was with Andy Carlson and Eric Knudsen .They seemed like little grems to him, but good surfers.
They drove up in his classic Volvo 122 S- 4 door and they had a blast. 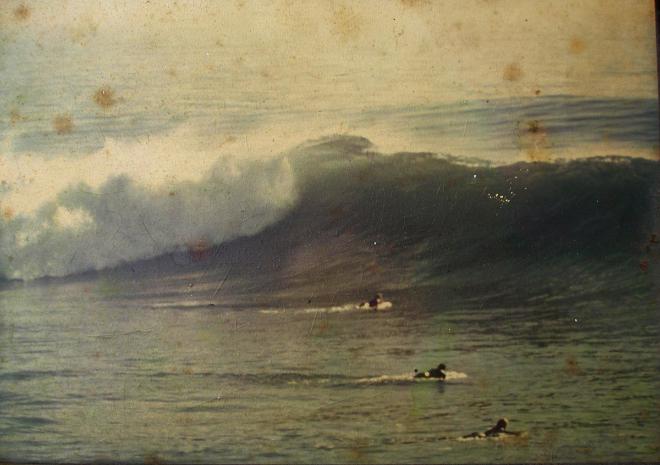 Steamers Lane, Santa Cruz  1973.
Up to 30 foot sets were coming in that day.
“That’s me paddling out closet to the wave, about to be pummeled. I remember jumping off the cliff.
I was crazy! 17 years old.”

We had to throw in these shots from Lizards Mouth just to show how Goleta has changed.
That’s D.P. in the right foreground. The big road going towards the ocean is Storke and the
big field to the right of it is where Camino Real shopping center is now.
That’s Devereux Point in the center. 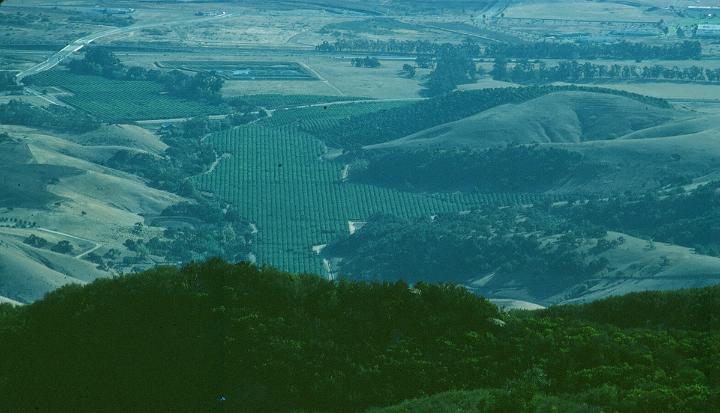 Here, the road on the left is Los Carneros. At the top is what is now the Goleta Research Park.
Below that is the Bishop Ranch, where today they are trying to build a bunch of houses. Looks like they
had some sort of reservoir or something there back then. 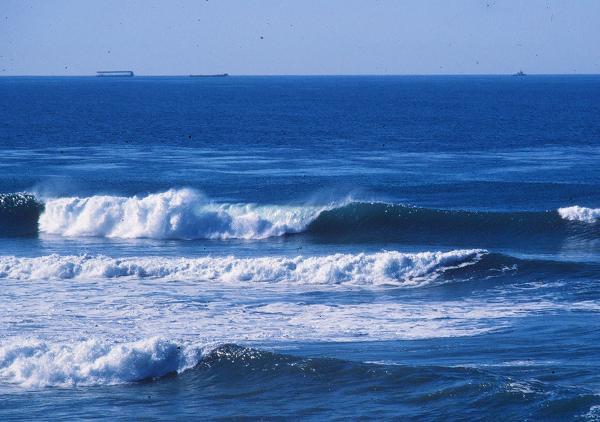 Final shot is a post session photo of a big day at Jalama, early 70’s.
He remembers the lip being especially thick that day.
Casey has more photos and movies we hope to see soon.

Thanks for sharing the memories Casey!

No Ads. No Hype.
No Sponsors. No Stress.
Just Stoke.